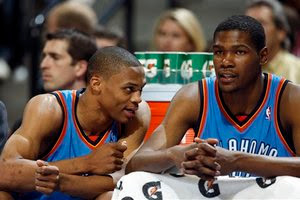 Denver stumbled over Thunder on their way to adding one more victory to their six winning streak. But for OKC, only 12 minutes were required in order to let the Nuggets know who will win the game. During those minutes, Thunder took the lead by 27-16.

KD led the team with 32 points and nine rebounds. Westbrook contributed with 18, while Harden as usual, coming off the bench, added 13.
Ibaka and Perkins did a good job at grabbing rebounds - 14 and 11, respectively.

The forth quarter gave the Nuggets some hope when they scored five points which helped them take the lead, 72-69. Oklahoma City answered back with a 16-0 run, emphasized by Durant's slam on a pass from Maynor.

Throughout 1:45 minutes that were left, Denver tried tempestuously, but failed to catch the Thunder.

This game marked the first time OKC won against this team in seven straight games at the Pepsi Center.

Only five games remain until the end of the regular season. Thunder now, meets up with L.A. Clippers on Wednesday night.

Until then, and until the playoffs,

That match was superb, I was watching live with full excitement! huhhh....:)

Hey thanks for all the useful information. I will visit your site when you have more information on that.