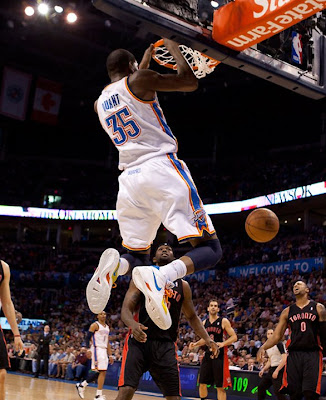 OKC Thunder's château of six straight victories collapsed Sunday night by Toronto Raptors (95-93).
Coming off the bench, James Harden led the Thunder with 23 points, followed by Westbrook's contribution with 22 and Durant's assistance with 20.
Kendrick Perkins did a great job by grabbing 12 rebounds but failed at scoring two crucial free throws that would have given OKC the lead by five points during the last seconds of the game.
"Our defense was great tonight but we just couldn't make any shots at the end. It is what it is. We just gotta work on it and move on" - said humble Durant.
Toronto's forward Amir Johnson, decided the final result of the game when he scored with only 1.4 seconds left. However, Durant took the responsibility to change the final result. He shot at the buzzer but failed. Hopes fell and so did the Thunder.
Next up for OKC is the game against Utah Jazz on Wednesday.
Until then - don't forget,
chin up and
THUNDERUP!!!
Posted by Linda Dobruna at 3/22/2011 08:38:00 AM


It's awesome in favor of me to have a web site, which is good in support of my knowledge. thanks admin hotmail email sign in

getting a visa for Turkey said...

Hi. This post was extremely inspiring, especially since then. Getting a visa for Turkey from using your laptop, tablet, smartphone or desktop PC. visa required for Turkey, The visa application process takes no more than ten minutes.

This is a wonderful inspiring article. I am practically satisfied with your great work. You have really put together extremely helpful data. Keep it up.. kenya business visa allows several foreign nationalities to enter Kenya for business ventures.


Hello everyone, Your site looks amazing and everything is nice & you post useful info. Thank you.. Do you know about What is 30 days India e-Tourist Visa Validity? You can get information about 30 days India e-tourist visa through our India Visa page. And documents required for Indian e-Tourist Visa , all the info are available on our page.