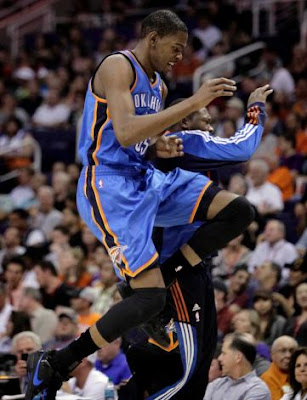 On Wednesday night at the US Airways Center, Thunder played yet another phenomenal game. OKC added a third victory on their last two games - this time Phoenix Suns was their "victim" (116-98).

Looking back at his last appearances, it's no surprise to know that Harden, coming off the bench, scored high 22 points.

In his three previous games against the Suns, Durant had averaged 23.3 points. This time he scored 22 but only as a result of Grant Hill's noteworthy ability to guard him.

Serge Ibaka had 15 while Westbrook contributed with 16 points and eight assists.
A low number of points is not an indication of a job not done well enough - it's completely the opposite; Westbrook showed to everyone that he plays for the name in front on the jersey, not the one on the back.

Coach Scott Brooks had nothing but words of praise for him. -"Russell was really good tonight. He's had better stats in the past but he really controlled the game. He was active on the ball and I thought his command of the game put us in a position to win tonight."

With only eight games left in the season, Thunder meets with Portland Blazers on Friday night. Let's hope this game will be one of those games where the Thunder does what it does best - bring bad weather to other teams.