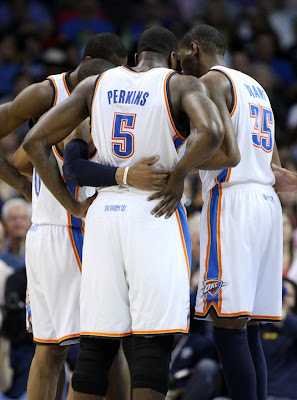 All-Stars Durant and Westbrook, combined together stupendous 60 points which gave the Thunder a bounce-back win against Utah Jazz on Wednesday night (94-106).
To this victory, except Westbrook's 31 and Durant's 29 points, the ones that contributed were also Serge Ibaka and Nazr Muhammed.
Ibaka's great performance was crowned with 15 points and 13 rebounds, while Muhammed scored 10, respectively four.
Sefolosha's two steals and four assists, and Perkins' two blocks, increased Thunder's opportunity for the fifth time to hold opponents to less than 100 points.
OKC's and Jazz's game during the third quarter was crucial at determining the winner of the game. Tied at 61 with only four minutes left, the Thunder took a nine point lead into the fourth quarter.
As the end of the game was approaching, humble Durant hit two 3-pointers to boost the lead to 16 points. This high deficit made OKC comfortable enough to continue their path straight to victory.
"It's good to get a nice bounce-back win. They're a very physical team. We knew they would play with desperation and I thought we matched their physical play" - said coach Scott Brooks.
Brooks also said a few nice words about Mohammed's game - "Nazr did a good job of giving us a good spark when we needed it," he mentioned. "He is a very smart player and understands his role, what the team needs and when it needs it".
Thunder next game is against Minnesota Timberwolves, Friday.
Until then,
THUNDERUP!!!
Posted by Linda Dobruna at 3/24/2011 06:49:00 AM

Hello. My name is Michael and I am one of the hosts of the OKC ThunderCast, a podcast dedicated to the Thunder. Are you interested in a link exchange?

PS: you can email me at hosts at okcthundercast dot com. Thanks.

Content PhentermineHome.com will help you get your curvy figure back with the best deals available on the weight loss drug Phentermine, which will help you in slimming without the need of starving yourself or by without going under the painful procedure of surgery.

Like all games you play in opposition to the home in a casino, it's nearly inconceivable to actually win in lengthy term|the long run}. However, video poker provides a few of the the} greatest payouts for a slots-type machine when performed well. In truth, when mixed with a great casino comp schedule, have the ability to|you presumably can} really make a profit end result of} freebies 더킹카지노 given out. There are 9 types of video poker that we discovered playable throughout our visit to Black Hawk casinos. The theoretical payback percentages proven in the following list assume that the participant is betting 5 cash and using perfect strategy. You can easily win the video poker recreation Deuces Wild, {as long as|so long as} you're be} conscious of its main guidelines.