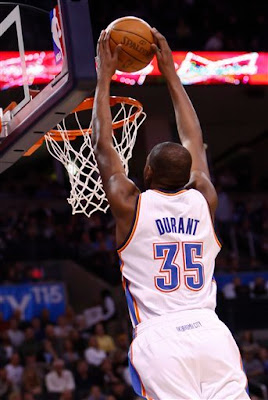 "I wanted us to set the tone on defense from the start " - said coach Scott Brooks and that's exactly what the Thunder did on Wednesday night against Indiana Pacers.
From the very beginning, the Pacers had trouble keeping up with OKC. On the first quarter, the latter kept a high margin of 10 points and continued increasing it throughout the whole game (113-89).
Besides the strong D, Thunder's offence was well-rounded -- every active player scored. Russell Westbrook scored 21 points and nine assists while James Harden added 20.
Humble Durant contributed only 21 points as a result of a sprained left ankle on the third quarter when he stepped in Tyler Hansbrough's foot and had to be taken to the locker room.
Hansbrough led the Pacers with 13 points while Dahntay Jones scored 12.
At the end of the third quarter OKC led by 27 due to a wonderful teamwork. This brilliant collaboration was also noticed at the free throw line where the Thunder scored an impeccable 19-for-19.
The new Thunder players - Nazr Mohammed and Nate Robinson had their first debut with the team. They were saluted with a standing ovation by all Thunder's fans and bench.
A victory such as last night's, keeps the Thunder three games ahead of Denver in the division competition.
OKC Thunder's next game is on Friday against Atalanta Hawks.
THUNDERUP!!!
Posted by Linda Dobruna at 3/03/2011 03:44:00 AM