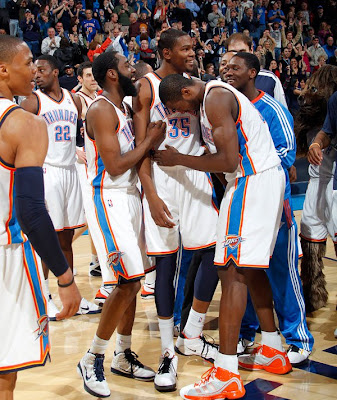 He also contributed with five rebounds while Durant had only 17 points and collected seven boards for the Thunder.

OKC had seven players with double figures - Jeff Green and Nenad Krstic both scored 16 points, Serge Ibaka had 15 points, nine rebounds and four blocks.
James Harden contributed with 12 points and Russell Westbrook had a double-double of 10 points and 11 assists.

Thunder's entire starting lineup watched the game from the bench in the fourth quarter as the rest of the team took the lead by 25 points.

"We did a really good job of coming out and playing good defense. We played about as good as we can play. Kevin (Durant) talked to the guys at shoot-around this morning about the importance of coming out strong and we did." - said coach Scott Brooks.

The moment Westbrook did a monstrous dunk during the first minutes of the game, the Kings knew things were going to get tough. DeMarcus Cousins put this into words for us:“That really got their blood flowing…They smelled blood.”

Besides scoring a team-high nine boards, Ibaka jumped everybody out of their seats by rejecting a dunk attempt by Jason Thompson in the final two minutes.

OKC now goes into the All-Star break with seven games won of the last ten.

Next up for the Thunder is the game against LA Clippers on Tuesday, but before that, we have three OKC Thunder representatives (Durant, Westbrook and Ibaka) at the All-Star weekend.

Don't forget to watch them as they will return to Oklahoma with nothing but the best - victories.