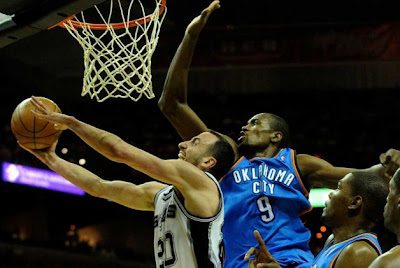 Wednesday night marked the sixth win for San Antonio Spurs over OKC Thunder (105-109).
Six was also the number of available seconds Jeff Green had in order to tie the result. This attempt however, ended with an off-balance 3-pointer.

Tension was building up when Gary Neal received a seemingly unintentional elbow from James Harden and especially when Parker got fouled from Collison on his way to the bucket.

The ones that received technicals for this were humble Durant and Tim Duncan.
*Chirp, chirp...*

OKC entered the fourth quarter with a result 88-80, but with a pair of 3-pointers made by Harden and Cook, the Thunder managed to lead by two points.

During the final seven minutes, Harden had the chance to raise the margin by five points if he wouldn't miss a three.
Tony Parker took advantage of this situation - he got the rebound, got fouled, hit both shots and tied the result.

KD scored a high number of 30 points and nine rebounds in comparison to the two previous games against the Spurs (he averaged less than 20). Russell Westbrook contributed to the team with 25 points.
For San Antonio, the player that had the highest number of points was Tony Parker (20).

In case you don't have any plans this Friday night, turn on the TV and watch Thunder's next game against Orlando Magic.