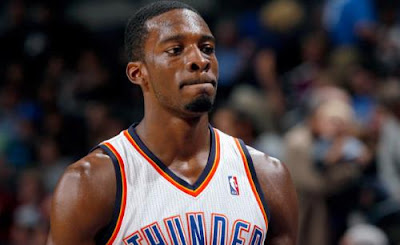 Where is the “good” in goodbye?

The Oklahoma City Thunder is now officially a team with three new players. In order to obtain the services of Nate Robinson and Kendrick Perkins (Boston Celtics) exchanges were made. The ones that "suffered" were forward Jeff Green and center Nenad Krstic.

“It is never easy to make decisions such as these and I thank Jeff and Nenad for their contributions to the Thunder organization and to this community. They define professionalism and I wish them the very best in the future,” Presti said.

Perkins is expected to miss at least one week due to a sprained ligament in his left knee.

His appearance at the NBA (8th season) is crowned with career averages of 6.4 points. He appeared in 12 games this season with Celtics, with an average of 7.3 points and 8.1 rebounds in 26.1 minutes.

Robinson who won the Slam Dunk three times in a row (the only one in NBA history) is currently in his 6th NBA season. He possesses career averages of 11.3 points. He attended 55 games with the Celtics, averaging 7.3 points and 8.1 rebounds in 26.1 minutes.

As much as he's excited with the new players, Presti also acknowledged the fact that it was very difficult to trade Green.

“Jeff Green is like my son. I love that kid,” Presti said. “This is by far the toughest decision I’ve ever had to make since I started this job.”

In an individual deal, the Thunder traded shooting guard Morris Peterson and forward D.J. White to Charlotte in exchange for center Nazr Mohammed.

“We would like to thank both D.J. and Morris for their many contributions here in Oklahoma City on and off the court,” said Presti.
“For the past three seasons, D.J. has been the ultimate teammate and one of our hardest workers. Morris has been a consummate professional and I wish them both success. Nazr will bring veteran leadership and playoff experience to our roster and we are excited for him to join our team in Oklahoma City.”

“I like Nazr. I always have,” Presti said. “I know his approach. I know his attitude. I know his work ethic. He’s an unbelievable pro. Perkins’ and Mohammed’s professionalism are off the charts.”

The best things said come last. People will talk for hours saying nothing much and then linger at the door with words that come with a rush from the heart. - Alan Alda