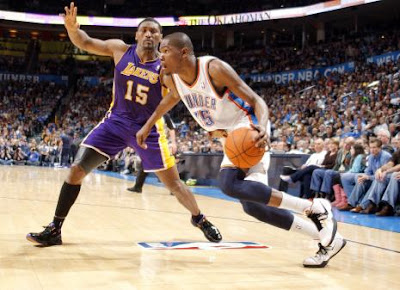 Victory slipped away from their hands.

Or rather, the appropriate thing to say would be - the ball slipped from OKC Thunder's hands at the last seconds. Both humble Durant and James Harden had the chance to tie the game but both 3-pointers couldn't find the rim.

“It felt like nothing could go our way,” Durant said. “We missed shots and layups … These losses are tough.”

Russell Westbrook led the Thunder with 22 points, six rebounds and six assists while Durant had 21 points. They showed up but nevertheless, none of the new team members played.

Pau Gasol was the one who led the Lakers straight to victory with 18 points and eleven rebounds.

OKC made it especially hard for the Lakers during the first quarter when they kept the lead with as many as 14 points. Meanwhile, the halftime was particularly welcome for the latter since they came out much stronger defensively and blocked Westbrook from shooting at will.

Even though Sefolosha and Harden did an outstanding job at blocking Bryant, he still managed to score (only)17 points and seven assists.

The last 4.9 seconds of the game held everyone's breath when Durant's attempt to tie the score failed. However, hopes were revived again when Nick Collison tapped the offensive board back out top, at which point Harden had an open look with 2.8 seconds left, but also failed.

"We wanted a three for KD at the end, it was a tough look but when we got the rebound James (Harden) had a good look. So yeah we wanted the three to tie and if that wasn't there try to get a two and get fouled." - said coach Scott Brooks.

This game was the third loss in a row for OKC this season.

Next up for the Thunder is the game against Indiana Pacers on Wednesday.