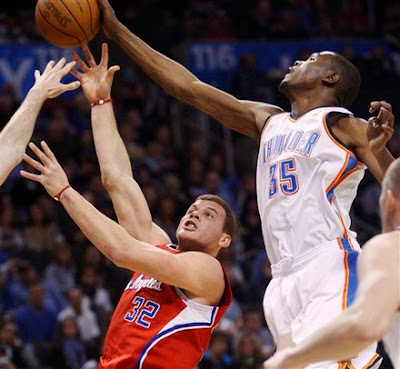 LA Clippers forward Blake Griffin was welcomed with an enthusiastic ovation back to his hometown in Oklahoma City. However, the moment the game started he was treated as any other rival by OKC fans.

Tuesday night, the Thunder won for the first time in Oklahoma City against the Clippers with a result 88-111.

A pat on the back goes to Jeff Green for scoring 22 points, Durant 21 and Harden who came off the bench and contributed with 19 points. Besides them, the bench altogether scored as much as 44 points.

"It was a good win, everybody chipped in and helped us win this game tonight." - said coach Scott Brooks.

The credits for the Clippers' attempt to win, go to Blake Griffin who led his team with 28 points, 11 rebounds and eight assists.

Next up for the Thunder is the game against San Antonio Spurs on Thursday.

Good afternoon, and in case I don't see ya, good evening, and good night!