OKC Thunder at the All-Star game 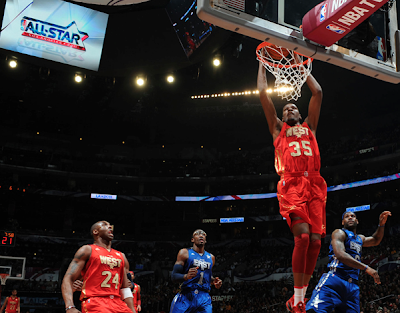 Weekends are good.
Actually, they're more than good - they're great, especially when you get to watch basketball for three days in a row as your favorite players from different teams play side by side.

This weekend made no exception. Us, the ordinary people, had the chance to catch a glimpse of the oh-so-far-away stars, on and off the court.

Before sitting in front of the TV with friends, family or snacks, and just a few minutes before seeing Durant, Bryant, James, and other stars, all eyes were on Josh Groban who sang the U.S National Anthem.

Unsurprisingly, his magical singing was flawless and fluid.
During the national anthem, instead of putting their hand close to the heart, most of the women (taken away by his voice) kept them under the chin while each one of them hummed the song "Killing me softly" as Josh kept singing.

After that moment, everyone's attention was directed to the game. The competition was amazing between the two teams. This was noticed especially during the fourth quarter where the West had difficulties but managed to win the game with a result 148-143.

To the tremendous 148 points, Durant and Westbrook together combined for 46 points. KD contributed by scoring amazing, 34 points and a perfect eight for eight from the line. He also had a pair of steals and blocks.

Westbrook's 14 minutes were crowned with 12 points, five rebounds and two assists.
“It was a great feeling. It was fun to be back at home in front of my family. I had a good time.” - said Russ on his first AS game.

Back to Durant, his 34 points line him up as the 14th player in AS game history to score 30 or more. This number of points ties him with Tracy McGrady, Tom Chambers, Julius Erving and George Gervin for seventh best scoring performance in NBA history.

The MVP went to Kobe Bryant who scored as much as 37 points, but KD was second best.

On the post-game news conference Bryant mentioned that when it comes to getting the spotlight, it’s time for him to step aside and make room for the young guys.

Besides being proud of playing aside Bryant, humble Durant was especially proud of Westbrook.
“I’m so happy for Russell, just making the game and being in his home town. For him to come out and play the way he played, I’m proud. Hopefully this is the first of many more. I’m sure you’ll see Russell in the starting lineup in this All-Star game in a few years.”

Other Thunder players who participated at the AS game were Serge Ibaka at the Dunk Contest (had a great appearance but didn't make the finals) and James Harden at the Rookie Challenge who scored 30 points.

Now that the weekend's over, OKC's players are back in Oklahoma. Tonight the Thunder is playing against LA Clippers.
Our guys may be a little tired but don't forget what Tommy Lasorda said about doing something you love: Guys ask me, don't I get burned out? How can you get burned out doing something you love? I ask you, have you ever got tired of kissing a pretty girl?

No matter the circumstances, I know it and you know it - they love this game.