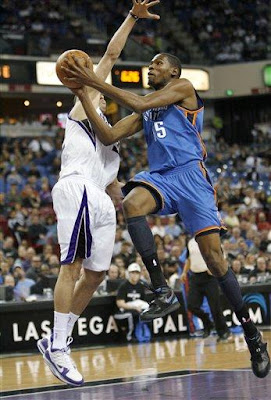 Oklahoma City Thunder bounced back after losing to Memphis Grizzlies on Wednesday night.

Saturday marked an important victory of OKC against Sacramento Kings (99-97) - the fourth in five games.

The Thunder took the lead thanks to Eric Maynor's 3-pointer which also ended the first quarter. This advantage continued almost throughout the whole game - OKC almost gave up during the final moments.

Our team was leading by only two points with 5.8 seconds remaining when Durant missed both free throws which gave the Kings one more opportunity.

All Thunder fans wiped their forehead - including Durant and the rest of the team when Tyreke Evans missed the three-pointer.

Even though he missed those free throws, humble Durant finished the game with as much as 35 points. James Harden had a career-high five steals.

Kevin Durant twisted his left ankle during the third quarter but kept playing.

"Yeah, it should be alright. Twisted it a little bit tonight in the third quarter. But you know, I kept pressing and putting my weight on it. If it was hurt too much I would have come out of the game but it was cool for me to finish the game and hopefully it will be cool tomorrow." - said Durant.

Next up for the Thunder is the game against Golden State Warriors.