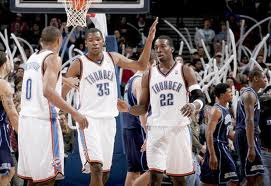 OKC Thunder won over Minnesota Timberwolves in OT with a tight result 118-117.

This happened all thanks to Durant's amazing appearance who managed to score as many as 47 points and a career-high 18 rebounds.
By doing this, humble Durant helped the Thunder get back on their feet from a three-game road losing streak.

Durant showed his scoring abilities especially during the final minutes of the game. He kept scoring big shots which helped at stopping the Timberwovles.

During the overtime, the two teams applied the saying "it's all or nothing". There was hardly ever a two-point lead that stayed like that for long. But the turning point was definitely a missed free throw by Corey Brewer with 7.6 remaining in OT.
The Thunder took advantage of that and closed the game with a one point win.

To close it up, here's something that humble Durant said that's worth putting on the best basketball quotes - "...a fun game to be a part of. A game as a fan you hate to see end. As a player you want to play these type of games".