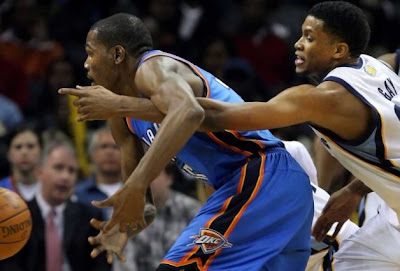 January is a great month - and I'm not saying this just because Muhammad Ali, Jim Carrey, Elvis Presley, Denzel Washington and, ahem - me, were born during this month.
A lot of nice things occur on January but judging their last games played this month, the Thunder ain't thinkin' the same.

OKC fell to Memphis Grizzlies 110-105. Memphis carved their victory as early as in the first quarter.

The second quarter was all Thunder. Our guys managed to lead the game most of the time and also went to halftime tied at 55. The third one, needless to say had it written Memphis Grizzlies all over with Rudy Gay leading the way.

The Thunder as a team, collected only three offensive rebounds, while in general OKC was outnumbered by Memphis 42-31.

Russell Westbrook was the one who had impressive numbers - he scored 28 points, seven assists and four rebounds. Kevin Durant also had the same scoring numbers - 28, made nine rebounds, three assists and two steals.

OKC's next game is against Dallas Mavericks. Our team lost both meetings against them but hey, you know what they say: Third time's a charm!

We could really use a little luck.
I'm just sayin'...