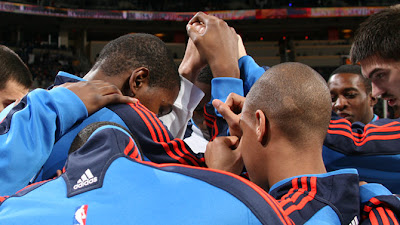 It snowed here in Kosova. I never liked snow more than today.
Actually, I never liked snow.
Maybe because I kept falling down and embarrassing myself, but today, I slowed down the pace.
I stood glued to the window until the snow stopped falling.

Then the magic disappeared along with the melted snow.

This reminded me OKC's recent games. Their victories were beautiful to watch, just like the snowflakes. Until last night, when the magic disappeared somehow.

OKC was defeated by Toronto Raptors with a result 99-111. The first half belonged to the Thunder (59-52). With Durant inactive for two games in a row, the winning responsibility was on Westbrook's shoulders.
He did the best he could by scoring 20 points and seven assists. Westbrook couldn't reach his full potential due to Jose Calderon's great ability to keep him from scoring.

Defense made the difference and won the previous games but not this one. This time, defense was weaker. With only 3 minutes left, they "let" Toronto lead 99-89.

To the total sum of 99 points, James Harden did a good job by contributing 20 points, same as Westbrook, while Jeff Green scored 17 points and seven assists.
But the one that stood out from the rest of the team was Thabo Sefolosha. Last night he set a career-high with six steals.

OKC's next game is against Golden State Warriors. I'm not good at predicting but since the holidays are near, my Believe-O-Meter has raised considerably.
With that said, I hope and believe that OKC will win this one.

And if they don't, it's alright. Because you know what they say - a good balance of winning and losing is important. You need a few losses to remind you how much winning means to you.

It's OK to lose sometimes.