Thunder wins over Nets in OT 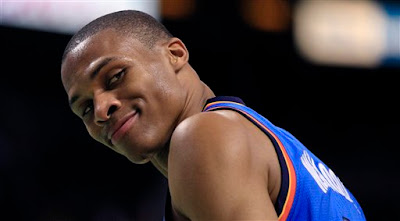 It seems perfect, doesn't it?
Except the fact that Kevin Durant was inactive due to a sore left knee.
But he was there. Wearing an elegant yet sportive suit, humble Durant was cheering for the team and giving maximum support.

I am proud to say that the Thunder is currently 2nd in the Northwest Division. This ladder climb is all thanks to great games that the team is playing, such as last night's.

Westbrook and Green were the key players of the game.They combined together 75 points for the Thunder.
Since Jordan Farmar and Brook Lopez missed potential game winners in the first and second overtime, Westbrook took over by giving OKC another win. He did this by scoring 38 points, nine assists and 15 rebounds.

A great "Westbrook Moment" during the game was when he dunked a missed jumper from Serge Ibaka. To me it seemed as if he was doing the "Red Bull gives you wiiiings" commercial.

Nets played good since they pushed OKC in overtime with a 3-point buzz-beater shot. Even though they took a late-game lead in the fourth quarter, their game wasn't good enough to win.

Jeff Green's wonderful appearance was crowned with a career high 37 points and three free throws, with only 4.6 seconds which sent the Thunder in the third overtime.

By winning this game, the Thunder showed that endurance is patience concentrated. Last night, everything was like it should be. OKC won thanks to: triple overtime, flawless Westbrook, amazing Green and solid defense.

It almost seems perfect, doesn't it? Except the fact that Kevin Durant was inactive due to a sore left knee.

We missed you KD.