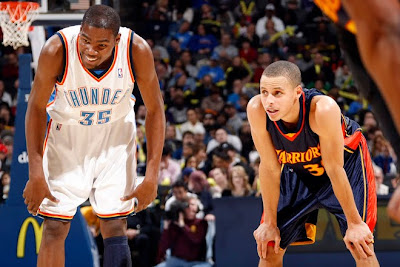 Durant and Westbrook left aside their Competitor Attitude for a moment when they met USA teammate Stephen Curry. They exchanged their golden smiles which were won in Turkey, except Curry's smile turned into a frown.
This happened due to OKC's victory against the Warriors with a result 114-109.

Durant's return brought freshness inside the team. Besides scoring 28 points, seven rebounds and missing only one shot from the line, humble Durant helped his teammates to score double-digits.

The Thunder as a team, made impressive 37 shots of 40 at the foul line.

OKC's next game is against Chicago Bulls. Last time these two teams met, was at the season opening of the Thunder. Our team did a good job by winning 106-95.

Since OKC won their previous game "thanks" to my raised Believe-O-Meter, imagine what they would do if every fan believed in their winning abilities.
And by this, I don't mean I-love-OKC-when-they-win, and I-hate-OKC-when-they-lose kind of "fans".
Kobe Bryant once said: My parents are my backbone. Still are. They're the only group that will support you if you score zero or you score 40.
Now, we're not OKC players' parents, sisters or brothers but we surely are their second family. So lets show them that by giving maximum support no matter what.