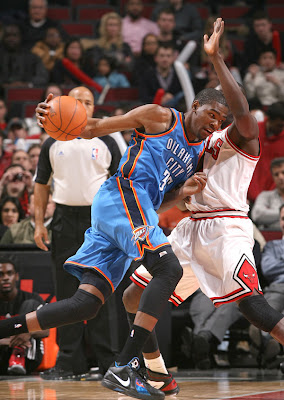 Disappointed?- Naah.
Angry? -Absolutely not.
Happy? -No, not really.
Sad? -A little.

It's not because the Thunder lost. OK, maybe a little.
But it's more because of the unbelievably high expectations in life. You know how it goes - when you make them, you feel energized, ready to conquer the world and when these expectations are too high, they slam you on the dirt.

It's not because the Thunder lost. They did a solid job in the first and second quarter. During the third one, offense had difficulties at performing their best game.
In the fourth quarter, OKC outscored the Bulls 24-17 but only for a short period of time.
The Thunder fell to Chicago Bulls 90-99.

Nenad Krstic scored career-high 18 points and six rebounds.
James Harden contributed with 13 points off the bench to a total of 90 points that marked OKC's loss.

Boozer scored 29 which were instrumental at finishing the game with 99 points for the Bulls.

Being a little sad doesn't mean that it's because the Thunder lost. Sometimes it's because of the high expectations. When these expectations are too high, they slam you on the dirt.
Then you try to get back up. You crawl but you fall again.

Then it starts to rain.
When it does, you feel hurt and sad but you fail to realize the most important thing. By the time all of this happened, you got back on your feet while the magical droplets of rain washed away the dirt from you.

G.K. Chesterton said: And when it rains on your parade, look up rather than down. Without the rain, there would be no rainbow.