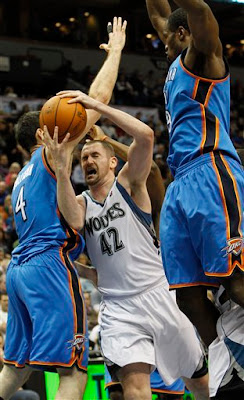 Out with the dark blues and in with the OKC colors!

After a tough loss in Chicago, the Thunder got back by winning the game against Minnesota Timberwolves 111-103.

The first quarter definitely wasn't an indicator that OKC would win - the Wolves kept a deficit by 19 points. OKC's game during the third and fourth quarter proved instrumental at this victory.

The one that made the difference was Kevin Durant. He tied the score with a 3-pointer with only 34 seconds left. After that, humble Durant made his way back to the defense while clapping his hands with a GAME ON! attitude.

Besides tying the score, KD kept doing his job in order to win. He scored 30 points, grabbed 11 rebounds and six assists.
Russell Westbrook contributed 25 points and eight assists while Serge Ibaka had a career-high 8 blocks.

OKC as a team had 42 rebounds. What helped the Thunder get back into the game, was strong defense and rebounding which was all thanks to our leader Kevin Durant.

Along with Westbrook, KD is considered the first wheel of the "Thunder Mobile" - if they go right, the rest of the wheels will follow them. Until now, that's exactly what they've been doing.
Durant and Westbrook are the "Now the party don't start 'til I walk in" leaders. And man, we need that party going more than ever!