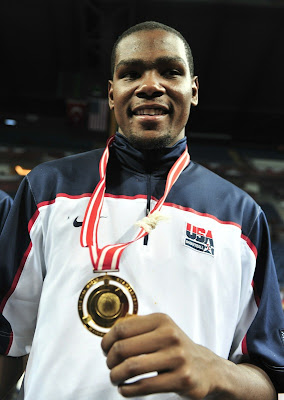 It all started several months ago when Kevin Durant led team USA to win golden medals in the 2010 FIBA World Championships. Humble Durant had a dynamic performance and set numerous records for the U.S. team.

During the World Championships, Durant had an average of 22.8 points, 6.1 rebounds, 3.1 assists and 1.4 steals per game which were a strong catalyst to an impeccable victory in Turkey.

And to think that all of this was done without the help of LeBron James, Kobe Bryant or Dwight Howard.

KD is definitely enjoying more than 15 minutes of fame. He is doing a great job at leading Oklahoma City Thunder - 1st in the Northwest Division.

After receiving his award, Durant scored 32 points to mark an important victory over Houston Rockets, 117-105.
“It means a lot,” Durant said. “My goal was to represent my country to the best of my ability. I really appreciate all the coaches and players that I got to share that experience with. I’m very humbled by this honor.”
Humble Durant joined previous winners such as Jason Kidd, Carmelo Anthony, Tim Duncan, etc.
He will also be submitted for the U.S. Olympic Committee’s 2010 Sportsman of the Year Award, which will be announced in January.

His phenomenal performance has also put him in the lead of all West Conference forwards for this year’s All-star game with 471,000 votes.

Of what shall a man be proud, if he is not proud of his friends? -Robert Louis Stevenson.

Everyone who had the chance to follow KD on facebook or even twitter can notice his humbleness - he never takes credit for victories. He's always praising his teammates and helping them to climb the ladder of success, be it for team Thunder or team USA .

Since Durant can't thank enough everyone for the support, I think we should do our best to let him know how much we thank him.
If you can't find a good reason, let me to give you one: when a Thunder game is on and KD is playing, we should thank him for a very simple thing, such as allowing people to check their problems at the door, sit down and have a good time.

We can no other answer make, but thank you, thank you and thank you.

We are proud of you KD!