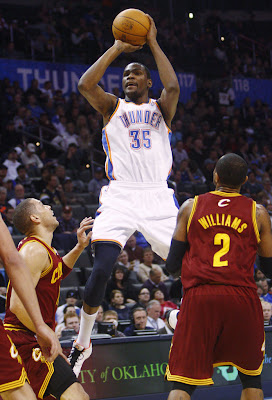 There are two alternatives that explain OKC's victory against Cleveland Cavaliers:

Last night's game was phenomenal. OKC won over Cavs with a result 106-77. The Thunder dominated all the time which led to the biggest victory of all season - so far.

Except the wonderful team-play, the one that stood out from the rest of the guys was James Harden. He played for 20 minutes and scored 20 points. If you add the three magical assists and rebounds, you can definitely consider him a magician.

Speaking of magicians, KD did an astonishing job at the last night's game. As the initiator of the victory, he made a 3-pointer to put the Thunder ahead in the first quarter.

Now, if you watch the picture I posted carefully, you will agree with me that Durant should be the Old Spice NBA guy. Just think about it and picture KD saying this to other NBA players:

Look at your team, now back to mine. Now back to yours, now back to mine.
Sadly, yours isn't mine. But if you stopped playing like that and watched how we play, your team could be like mine.
Look down, now back up. Where are you? You're watching TV, watching me play the game that you could play.
I'm on air.

Back to serious stuff.

As mentioned above, this game was the biggest victory of the season for the Thunder. But the season is still young. Who knows, maybe the Lakers will have a surprise from OKC.

Thunder's next game is against Houston Rockets on Wednesday. We hope OKC will keep up the good work and never cease to amaze us.