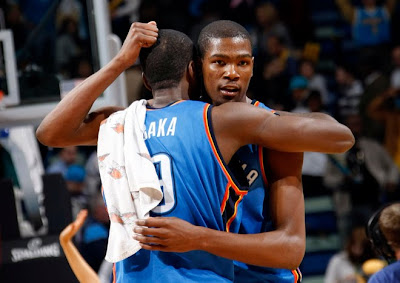 I'm sure his name was mentioned more than twice since he was the hero of last night's game. Humble Durant made a generous contribution to Thunder's victory by scoring 26 points and eleven rebounds.

This all happened before coach Scott Brooks assigned him Hornets' forward David West with only five minutes to go. That's when Durant's game made my heart pound crazy. His wingspan proved to be instrumental at blocking an almost 100% dunk from Okafor.

Besides Durant's astonishing appearance, a worth mentioning moment is when Jeff Green used his gummi-bear jump and blocked spectacularly Chris Paul.

Scott Brooks' decision to put Durant in the defensive end was a smart move. By doing so, he not only won the game but also showed that Durant is a well-rounded player and can do anything as long as he puts his mind to it.

Thomas Carlyle once said: Not what I have, but what I do is my kingdom.
Thunder's home win over the Hornets is one more proof that Kevin Durant is a great leader who is leading his kingdom at winning the battles.