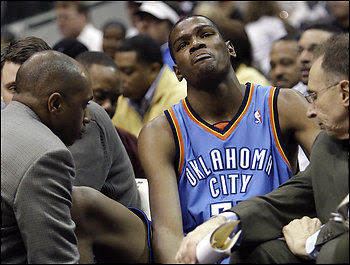 Durant limped from his twisted ankle but not the team. Everyone thought since KD won’t be playing against Celtics the Thunder would have slight chances of winning.

But they probably forgot that Westbrook was there and took all the responsibility to leave from Boston with a victory. He lead the Thunder to win over Celtics with a result 89-84. He did this by scoring 31 points, six assists, four rebounds and two steals.

The Thunder led almost the entire game while the undefeated team at home wasn’t in their best shape. Offense without Durant and Green was fragile for three quarters. But defense and free-throw shooting helped OKC win.

Royal Ivey’s great appearance helped the Thunder in a great way. He made a long jumper from the corner which was wonderful. But what it really made it special, was the fact that he did it almost the moment he checked into the game.

Also, his three-point bank shot while the clock was running out was astonishing. By doing so, Ivey gave the Thunder its first double-digit lead of the game.

Third quarter, with only 38 seconds to go and up by only one point, OKC made all the right moves to stop the Celtics. The ball eventually got in the hands of Ray Allen for the shot but, the good news is that he missed it thanks to Thunder’s solid defense.

It goes without saying that Westbrook did a phenomenal job as the leader of the team. It was especially important to win a game of this kind, against the team who hasn’t lost at home…until now.

The Thunder played without Kevin Durant, the team’s superstar and leader. Even though he was inactive, he showed moral support. The cameras also caught him while he was going inside. He was wearing a knitted ear-flap hat, headphones and a backpack with the just-bought ticket on.

We wish him a speedy recovery with this:

Here’s us, hoping avidly your recovery will be trouble-free,

and very soon we shall see, you fit, as fit can be