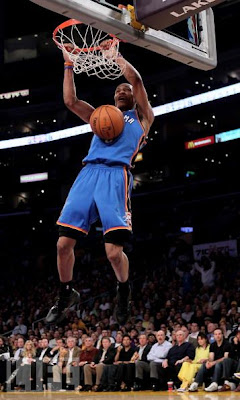 I was making my way downtown, walking fast, with my iPod on. Iyaz was playing and the song goes something like this:

Shawty's like a melody in my head
*mumble*
It's like my iPod is stuck on replay, replay.

Then something happened. This song triggered in my head a video I had seen that I kept replaying.
Voilà! I suddenly started smiling because I remembered the video. It's the moment when Westbrook takes back the stolen ball and slams!

All of a sudden, I see people walking away from me. What I didn't know is that they somehow, felt threatened from my creepy smile. They didn't know I was smiling for a good reason though.

Anyway, as the song kept fading away from my mind, I started thinking about the game that Thunder won over Rockets.

I mean, did you see it?! Did you see Durant, Westbrook, Sefolosha and the rest of the team?

The first half went pretty good with Durant scoring 17 points. But it's the second half that was amazing. OKC was playing a good game.

Then the routine broke. Westbrook had the ball and in a matter of seconds Lowry stole it from him. As the whole team started to run on the other way, Westbrook decided not to let this one slip away just like that.

He ran back, took the stolen ball and slammed!

Let me "slow mo" this for you. Westbrook took the stolen ball back with the hey-that's-mine attitude. He started running and rose from the floor to slam.
He probably made a phone call while on air!

Boy that must have felt great. I can't even imagine how it felt to actually be there and see it happen.

That's the most beautiful memory I took from this game. It was simply amazing.
Of course Thunder won over Rockets by 116-99.

So far, the Thunder won 7 games and lost 4 of them. Tonight OKC plays against Boston Celtics. I really hope the will keep up the good games and as usual, keep playing for the name in front of the jersey, not the one on the back.

Here's the link to Westbrook's magic trick in case you didn't see it. I assure you it will be stuck in your head on re-re-replay-ay.