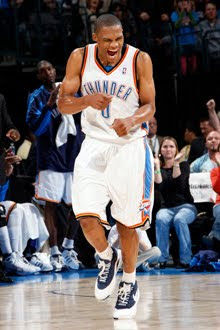 Actually, his birthday was two days ago - 12 November. It was the same day when the Thunder played against Portland.

Westbrook celebrated his 22nd year on earth by scoring 36 points that contributed to Thunder's victory over Portland (110 - 108).

Willie Stargell said: When they start the game, they don't say work ball, they say play ball.
So, even though you give your best, don't forget to have fun.

After all, Westbrook along with the team, play for the name in the front of the jersey, not the one on the back.