From WOW to OW - OKC falls to Mavericks 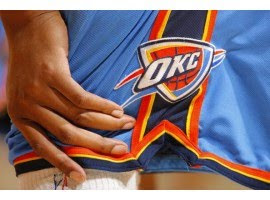 So the winning streak was broken on Wednesday night by Dallas Mavericks.
So what?! That doesn't make the Thunder less of a solid team.

There's a saying in Albanian "Sa ma nalt, aq ma poshtë". Translating it in English would sound very funny but I'll tell you what it means.
It means that MAYBE we've been praising the team too much and that is the reason why they lost last night.

If you had the chance to watch the game, you probably thought that the Thunder was going to win since they were doing a very good job during the three quarters.
Dallas Mavericks outscored the Thunder in the fourth quarter due to Nowitzki's 17 points which led to 111-103 loss to the Mavs at Oklahoma City Arena.

The Thunder guys did a great job at stopping Dirk Nowitzki and the rest of the team but they couldn't hold them for too long.

Durant's wonderful appearance was crowned as usual by scoring 32 points, 11 rebounds and five assists. Ibaka, Sefolosha, Westbrook and Collison did a great job too especially Ibaka who played a flawless defense on Nowitzki.

We must always remember that OKC is a team with a lot of young players who don't have much experience but still, this year wasn't just a year better than the other ones. Instead it's a year that brought more experience.

Another saying in Albanian is "Nuk ka rëndësi nëse rrëzohesh. Ajo cfarë është e rëndësishme është të ngrihesh përsëri". This one will not sound funny when I translate it for you.
It means It's not whether you fall down, it's whether you get up again.

Just because they didn't win, it doesn't mean that OKC gave up.
It's Thanksgiving Day, so let's thank our guys for every game they played and for keeping us proud.

OKC, thanks for giving!