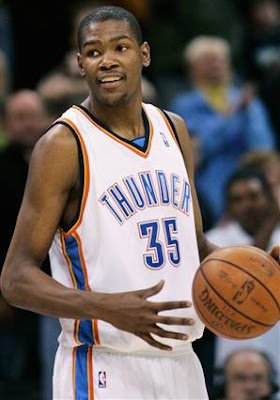 Who is he? – An anti-sports girl would ask.

ONLY the tall, dark and handsome guy that all girls dream of! – Would answer another one.

True, but besides that, Durant is also the world’s most humble athlete. This is an answer from a girl who loves sports and is a lawyer-to-be, which automatically classifies me

There are 5 reasons why I think like this. Let me tell you why Kevin Durant is my favorite basketball player.

1. He is a humble person – I know that every time you read something about KD, it’s IMPOSSIBLE not the notice the word humble. Well, let me tell you that if he wasn’t, people wouldn’t be mentioning it.

But what really strikes me is the fact that he doesn’t have the ” I’m a star. I’m unapproachable” attitude while putting his shades on.

It’s actually completely the opposite! He talks to his fans, lets them know about his day and asks for their opinion on different matters.

As you’ve probably seen lately, Durant moved to a new neighborhood and has a big fan who lives next door. His name is Mathias Murphy and he’s been posting videos of KD while he’s eating breakfast, taking out the trash, etc.

In this case, an average superstar would call the police. But considering the fact that KD is above average, he actually invited him over for a game. Need I say more?

2. He is a humble basketball player – Again the word humble, you would say. So what?! I think Durant’s middle name should be Humble – Kevin ‘Humble’ Durant! (Wouldn’t sound “humble” if he’d be the one saying this though…)

I don’t know about you, but I noticed this at the FIBA World Championship. During the games Durant made an excellent appearance. He never behaved aggressively and was always patient while waiting for his turn.

You can notice that at all of his interviews, he remains down to earth and never praises himself. A trait which, honestly is almost in the same level as the species that are near extinction.

3. He has a big heart – I’ve drawn this conclusion based on his actions. I have had the chance to read about his KD shoes during the FIBA World Championship. What was special about these shoes, except their nice colors, was the fact that he wrote ON them about the 9/11 tragedy. He found a subtle way to express his condolences to all the families that lost their dear ones. Which leads me to the 4th reason.

4. His attention to detail – To me, the little things are the ones that count. Kevin Durant used his eye to detail in a very intelligent manner (back to the KD shoes).

These are not just any kind of shoes that contain a beautiful graphic; every line and logo has a special meaning to Durant: the logo inside the shoe, containing the letters W P, refer to the initials of his parents’ names. The number 35 represents the age when his first coach, Charles Craig died tragically, etc.

As a detail-oriented person, I have noticed that a few seconds before shooting a free throw, Durant moves his right shoulder in a very subtle way which, I think is adorable.

Also, at his velvet hoop commercial, you can notice how he slightly raises his right eyebrow while singing (If you think this detail-oriented thing of mine is weird, wait until I tell you about my obsession with people’s noses!).

5. He’s one of a kind – Kevin Durant has the perfect combo of personality, talent, hard work and, ahem, physical appearance. It’s needless to say that this kind of combination leads to uniqueness.

Kevin Durant is no “next Michael Jordan” not even Kobe Bryant or LeBron James. He’s the first Kevin Durant and the young players to come, are going to be referred as “the next KD”.

Now, I don’t make predictions, I’ll leave those to fortune tellers and people who are good at this. But as an optimistic and a firm believer, I truly hope and believe that Durant will keep his positive traits and enrich them even more as time goes by.

He is a role model for many boys who want to be successful basketball players. Imagine how wonderful it would be if they adapted Durant’s personality.

Now that would be worth-mentioning when writing about the greatest, positive influences in the world!