That's right Thunder fans; a Storm is brewing in the Northwest Division. With almost one-third of the season completed, the Thunder stand one game out of the playoff picture. In the traditionally tough Western Conference, to be in the running early is a significant achievement. Kevin Durant is performing at his usual high level, leading the team in scoring with 27.1 ppg and 7.1 rpg. Russell Westbrook is providing solid play at point guard, with 15.9 ppg and 6.6 apg, good enough for ninth in the league. Rounding out the Thunder's young, solid core of talent is Jeff Green, the second year man from Georgetown, who is averaging 14.9 points and 6.1 rebounds per game. Together, these three account for roughly 60 percent of the Thunder's scoring. James Harden leads all reserves with 9.5 ppg and 2.8 apg.

The Thunder are playing solid defense, holding opponents to 44.6% from the field and 95.9 ppg, good enough for eighth and seventh in the league, respectively. Key areas for improvement for the Thunder are assists (24th in the NBA) and rebounding (15th). Key contributions in this area need to come from starting center Nenad Krstic as well as guards Thabo Sefolosha and Mike Wilks. Shaun Livingston could be a diamond in the rough, depending on the progression of his recovery.
Tonight's game against Houston, which is one and a half games ahead of Oklahoma City in the playoff standings, should prove a good test of Oklahoma City's postseason ability.
Posted by JBraun28 at 12/19/2009 04:16:00 PM 6 comments:

Are they well equipped to compete for a playoff spot? Or are they heading for the lottery once again? Let's have a look on how they look on paper.

Their projected starting line-up is really formidable and can compete with the best of them. At the guards, you have Russell Westbrook and probably James Harden (or Thabo). Russell can create for his teammates but still has a suspect outside shot. Maybe a year or two he'll be averaging 1 3pm a game. At the forwards spot is where the Thunder are OUTSTANDING. Kevin Durant and Jeff Green. I see a breakout year for both of these players. The more experience they have, the more dangerous these two can be. I can see Durant averaging 27 a game while Green averaging 18. Let's just hope they can mature and play some defense eventually. This is their weak spot, the Center position. Nenad Krstic is soft and won't probably help them a lot. Nick Collison can get some minutes here but they should trade for a someone who can bruise inside. Their bench is what will kill them, they literally have no one. They are banking on a resurrection by the boy wonder, Shaun Livingston. 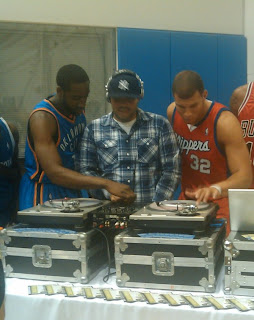 Well, it looks like its time to look ahead to the 2009 draft for our Thunder. Its has been a tough transition year but we can definitely turn it around in the coming years. It will be interesting to see who stands out in March Madness this year. If I were an online betting man and thought about a bet on March Madness, I would have to say that Oklahoma with Blake Griffin will be the ones on top.

Hopefully the ping pong balls drop right and and Mr. Griffin can grace the uniform of the Thunder. He will be a perfect complement to Durant on the floor. Hopefully he can help turn this thing around.
Posted by joemak at 2/16/2009 09:01:00 PM 3 comments: