C.J. Miles Is Coming To OKC 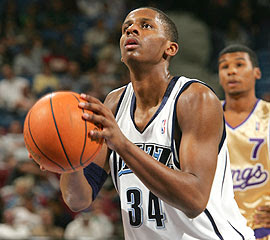 I don't recommend that you Google his name because of a Vietnamese "Adult" actress by the same name, but word is that we the OKC TBD's have offered Utah swingman C.J. Miles a short term deal. Because he is a restricted free agent, Utah has 7 days to match OKC's offer. Signed right of high school in 2005 high school, Miles has not seen significant minutes with the Jazz, frequently being sent down to the D-League.

This would be our first free agent signing and is a nice addition to the roster. It is no Baron Davis, but his minutes will be valuable. He has the capability to shoot the outside shot, but don't expect Carlesimo to give him the ball when the game is on the line.
Posted by Joe T. at 7/18/2008 05:52:00 PM

Get used to it, you guys are going to make Milwaukee, Sacramento, Salt Lake City and Memphis look cosmopolitan in comparison. The viability of a team in OKC is compromised by the fact that nobody is going to want to play there. Sorry, but nobody cares about Bricktown.

There's one silver lining to the NBA coming to OKC:

Kevin Durant is only going to be four hours away from a real team and a real city. Here's to the Mavericks clearing enough cap space to sign him in 2010.