Alright, we got a team, but who are these guys? We all know the big players from Clay to Kevin, but what about the rest of the players that we didn't seen in those Orlando practices. 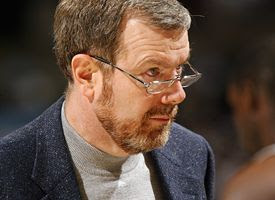 A few years ago it looked like Latrell Sprewell had gotten the better of infamous 1997 choking incident. Spree was off to the Knicks, later Minnesota after sitting out a one year suspension, while Carlesimo struggled without his star in Golden State and was fired two years later. P.J served as assistant in San Antonio for 5 years under Popovich paying his dues while Spree's star fizzled. While in there he saw first hand how coaches can and should treat their star player.

From what I read he has a definite East Coast swagger that can rub some players the wrong way. He coached at Seton Hall for over a decade before he made the jump to the NBA. Since his stint with Golden State, he got married, had some kids, and chilled out enough to get another head coaching gig. Clay and Co. have made no secret that their organization's blueprint for success is based on what San Antonio accomplished, but time will tell how well Carlesimo fits in Oklahoma City.

He was choosen for his "teacher of the game" label...

probably didnt hurt that he is inexpensive as well...

True, and he does have a rocking beard that says, "Listen to me children."

PJ is one of the worst NBA coaches in the last 20 years. He won't be around that long but it will seem like eternity. He is Presti's tank job / fall guy.